Hundreds of people are set to take to the streets of Manchester for a fortnight of free cycling events including the now infamous World Naked Bike Ride. 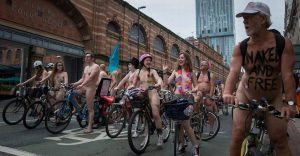 On Friday 9th June more than 200 brave cycling enthusiasts are expected to gather in Manchester for the incredible ‘bare as you dare’ ride. Ride organiser Andrew Fisher says “It’s all about getting cyclists to be more visible on roads. Drivers say they don’t see you, we’re saying cyclists need to be seen to get their fair share of the road.” Similar events take place in cities across the world and aim to highlight the vulnerability of cyclists.

The nude ride marks the beginning of North West Velo Fest 2017. This popular, free festival is now in its 6th year and despite appearances isn’t only for the naked or lycra-clad crowd. Festival organiser Joe Hulme says “There’s something for everyone, obviously the naked bike ride is the one everyone notices, who couldn’t? But it’s not all about getting your kit off. There are lots of other less scary opportunities to feel the wind through your hair in new places.”

The festival runs for two weeks from Friday 9th to Saturday 24th June. Events include a free bike tour of Manchester’s musical history, a street party, led countryside rides and races with cash prizes. The full lineup is available at http://www.nwvelofest.com.

Happy New Year! We hope you enjoyed the festive break and found time to get out on two wheels every now and again. The first Corridor Cycle to Work Breakfast of 2016 is happening this week, on Thursday, 7 January at the Royal Northern College of Music.

All cyclists old and new from Corridor Manchester organisations are invited to come along and enjoy the free breakfast, which will be provided from 07:45 – 09:30. As usual, you can register on Eventbrite to speed up your sign-in, or simply turn up on the day. Dave from Revolve MCR will be on hand from 8am onwards offering free bike health checks too!