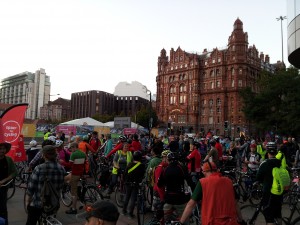 On Monday 22nd September, taking advantage of the Labour Party Conference being in town, Greater Manchester Cycling Campaign organised a Space4Cycling mass ride from All Saints’ Park to Barbirolli Square, just by the Manchester Central conference centre.  As you can see in the picture, a good number of cyclists attended and some short speeches were given by various Labour councillors, from Manchester and further afield, in support of increasing the per capita expenditure on cycling from below £10/head to the ‘Dutch level’ of about £20/head.  Sceptical noises from the crowd notwithstanding, the event was good-humoured and drew a lot of attention from passers-by in the city centre.